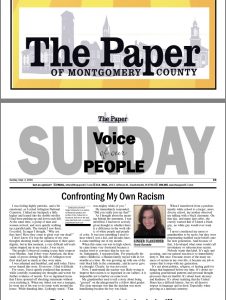 As I exited Arlington National Cemetery, I was feeling highly patriotic, and a bit emotional. I hiked my backpack a little higher, and leaned into the double stroller I had been pushing up and down each hill. At the same time, a group of men and women arrived, and were quietly walking up a parallel path. The instant I saw them, I recoiled. In anger I thought, “Why are they here? Have they come to gloat over our dead?”

Perhaps it was the ugliness of my own thoughts shouting loudly in contrast with their quiet dignity, but something stopped me in my tracks. In that moment, I had a very difficult self-realization. I was racist.

The people I observed coming to pay their respects were Muslim. And if they were American, the thousands of graves dotting the hills of Arlington were their dead just as much as they were mine.

I was ashamed and humbled, and until today I have never shared this story. Even now, I find it difficult.

For years, I have quietly pondered that moment while carefully examining my thoughts and words for further evidence of racism. It is so ingrained in me that I have spouted off shocking statements without even realizing it. When my oldest son was a teenager, he went out of his way to do some work around the house. While thanking him, I jokingly stated, “That was mighty white of you.”

He immediately responded, “Did you really just say that?”

As I thought about the meaning behind the statement, I was mortified. I had never actively given thought to whether there is a difference in the work ethic of white people and people of color. It was just something I used to hear when I was a kid, and decades later, it came tumbling out of my mouth.

When this same son was in high school, he came home very frustrated because a teacher tried to convince him he was racist. I was indignant. For practically his entire childhood, a Haitian family stayed with us for months at a time. He was growing up with one of the only black kids in the community, and he never gave it a thought. Clearly, he was not racist, I reassured.

Now, I understand the teacher was likely trying to impress that racism is so ingrained in our culture, it is nearly impossible not to harbor on some level.

My grandmother used to tell a story about being “goosed” on the playground by a fellow third grader. The clear message was that the incident was more humiliating because the boy was black.

When I transferred from a predominantly white school to a larger, more diverse school, my mother observed me talking with a black classmate. On that day, and many days after, she crassly warned that if I dated a black guy, no white guy would ever “want” me.

I never considered my mom or grandmother to be racist, but they were perpetuating instilled racist beliefs onto the next generation. And because of that, I developed what some would call involuntary or subconscious racism.

Nobody wants that label. It’s ugly and accusing, and our natural reaction is to immediately deny it. But once I became aware of the many nuances of racism in my own life, it became my job to ensure that it stops with my generation.

It’s not about politics, religion, or feeling guilt for things that happened before my time. It’s about recognizing generational patterns and personal thought processes that are hurtful. It’s about basic decency and kindness. It’s about realizing that the United States has a difficult history, but we all deserve respect in language and in deed. Especially when grieving at a national cemetery.