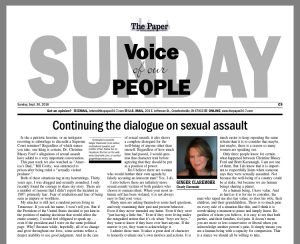 Is she a patriotic heroine, or an instigator resorting to subterfuge to discredit a Supreme Court nominee? Regardless of which stance you take, one thing is certain, Dr. Christine Blasey Ford’s allegations of sexual assault have added to a very important conversation.

This past week we also watched as “America’s Dad,” Bill Cosby, was sentenced to prison after being ruled a “sexually violent predator.”

Both of these situations tug at my heartstrings. Thirty years ago, I was drugged and sexually assaulted. I only recently found the courage to share my story. There are a number of reasons that I didn’t report the incident in 1987; primarily fear. Fear of retaliation and fear of being seen as impure or worthless.

My attacker is still just a random person living in Tennessee. If you ask his name, I won’t tell you. But if the President of the United States chose to put him in the position of making decisions that would affect the entire country, I would feel obligated to speak up…even if the president and I were on the same political page.

Why? Because while, hopefully, all of us change and grow throughout our lives, some actions reflect a deeper inability to use good judgment. And in the case of sexual assault, it also shows a complete disregard for the well-being of anyone other than oneself. Regardless of how much time had passed, I would question that character trait before agreeing that they should be put in a position of power.

Do I believe there are women who would further their own agenda by falsely accusing an innocent man? Yes, I do.

I also believe there are infinitely more sexual assault victims of both genders who choose to remain silent. When your most intimate self has been violated, it is not always easy to find your voice.

I admire those men. It takes a great deal of character to honestly evaluate one’s own motives and actions. It is much easier to keep repeating the same refrain than it is to consider that maybe, just maybe, there is a reason so many women are speaking out.

Only three people know for certain what happened between Christine Blasey Ford and Brett Kavanaugh. I am not one of them. But I do know that it is important to respectfully listen when someone says they were sexually assaulted. Not because the well-being of a country could be at stake, but because we are human beings sharing a planet.

As a human being, I have value. And as hard as it is for me to consider, the man who raped me also has value; so does his wife, their children, and their grandchildren. There is so much pain on every side of a situation like this, and I think it is worth taking a moment to pause and simply listen.

Regardless of whom you believe, it is easy to see that both parties, and their families, feel pain. It doesn’t mean you are more or less conservative or liberal when you acknowledge another person’s pain. It simply means you are a human being with a capacity for compassion. That is a stance we should all be willing to take.

« Creating A Sustainable Life Plan
Your Voice is Important and so is your Vote!! »