I’ve been working up to it for two months, and I’m pleased to announce that today, two weeks before my 48th birthday, I successfully finished and enjoyed my first cup of coffee! Without sugar! I’m finally a grown up!

I’ve always felt like I was missing out by not being a coffee drinker, and I finally grew weary of rejecting the cups offered to me. So, I set out on a mission to acquire the taste.

If one wants to achieve a goal, it is important to equip oneself with the proper tools. So, I went to Target and picked up a coffee maker, three types of coffee, and various flavored creamers. I didn’t want to become dependent on certain flavors, but it was important to have a palatable starting point.

Unfortunately, I got completely hooked on iced coffee with loads of cream and sweetener, which sort of defeated the purpose. However, the coffee flavor must have come through because today was the day!

See, the thing is, in our culture, offering someone a cup of coffee is a sign of hospitality and respect. It says, “I enjoy your company, and I’d like to spend a bit of time engaging in conversation with you.”

I suppose sometimes it is offered from a sense of obligation, but I’ve never felt that from the people who have offered it to me.

Throughout the years, as I’ve rejected cup after cup, I’ve felt as though I were saying no to something deeper. I was rejecting tradition, communication, and moments shared with valuable human beings.

In effort to facilitate those moments, I would often ask for tea instead. Many people obliged, but it changed the dynamic. Suddenly, instead of relaxing in the familiar, they were scrambling to produce a tea bag and hot water. I had a keen sense that my asking for something different from the norm was taking away from the overall experience.

So, this morning, for the first time, when I was offered a cup of coffee, I simply responded, “Yes.”

Within seconds, a warm cup was thrust into my hands, and I was curled up on a couch, watching snow gather on the window panes of a one-hundred-sixty-year-old farmhouse, while engrossed in conversation about writing, and politics, and the perils of aging. Before I knew it, I had added three new words to my “list of words I need to look up,” and I had finished the entire cup.

I guess what it boils down to is that coffee equates to time, and time is a valuable resource. When someone offers you their time, that means they believe you have value. In today’s fast paced society, where the majority of our interactions take place digitally, offers of coffee should not be taken lightly. They should be taken with cream, and perhaps a bit of sugar. So, take time to stop and smell the java. 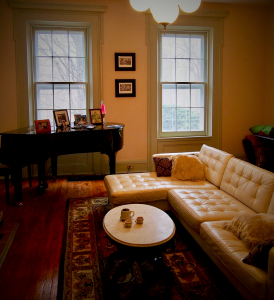 « Finding the Holiday Spirit through Love, Actually
20 Years Ago, A Boy Who Loved Me Died on My Birthday »