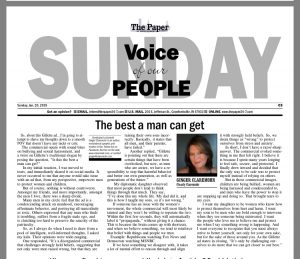 So, about this Gillette ad…I’m going to attempt to shave my thoughts down to a smooth POV that doesn’t leave any nicks or cuts.

The commercial opens with sound bites on bullying and sexual harassment, and a twist on Gillette’s traditional slogan by posing the question, “Is this the best a man can get?”

In my initial reaction, I was moved to tears, and immediately sharedit on social media. It never occurred to me that anyone would take issue with an ad that, from my perspective, empowers men to protect women and children.

But of course, nothing is without controversy. Amongst my friends, and more importantly, amongst the men I love, there was a sharp divide.

Many men in my circle feel that the ad is a condescending attack on manhood, portraying all masculinity as toxic. Others expressed that any man who finds it troubling, suffers from a fragile male ego, and is clutching too hard to preserve the sanctity of the patriarchy.

So, as I always do when I need to draw from a pool of intelligent, well-informed thoughts, I asked my kids. Their opinions were wide-ranging.

One responded, “It’s a disorganized commercial that challenges strongly held beliefs, suggesting that not only were men raised wrong, but that they are raising their own sons incorrectly. Basically, it states that all men, and their parents, have failed.”

Another replied, “Gillette is pointing out that there are certain things that have been overlooked, but now, as men who are aware, we have a responsibility to stop that harmful behavior and better our own generation, as well as generations of the future.”

My diplomatic daughter observed that most people don’t tend to think things through that much. They say, “I’ve done this my whole life. My dad did it, and this is how I taught my sons, so it’s not wrong.”

If someone has an issue with the women’s movement, the whole commercial will most likely be tainted and they won’t be willing to separate the two. Within the first few seconds, they will automatically label it “propaganda.” This is because the brain comes up with shortcuts, and when we believe something, we tend to reinforce that belief with things and people we trust.

If we hear something we disagree with, it takes a lot of mental effort to reason through and align it with strongly held beliefs. So, we deem things as “wrong” to protect ourselves from stress and anxiety.

In short, I don’t have a razor-sharp answer. The commercial evoked something in me that felt right. I believe it is because I spent many years longing to feel safe, secure, and protected. I finally drew inward and decided that the only way to be safe was to protect myself instead of relying on others.

But in those commercial images, children are being bullied, women are being harassed and condescended to, and men who have the power to stop it are stepping up and doing so. That brought tears to my eyes.

I want my daughters to be women who know how to protect themselves from hurt and harm. I want my sons to be men who are bold enough to intervene when they see someone being mistreated. I want the people who love me to believe me and protect me when I say something wrong is happening. And I want everyone torecognize that you must always strive to better yourself, not only for your own sake, but for the sake of those around you. As the Gillette ad states in closing, “It’s only by challenging ourselves to do more that we can get closer to our best.”