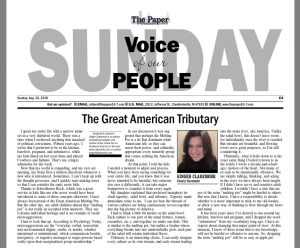 I spent my entire life with a narrow mindset in a very sheltered world. There was a time when I eschewed anything that smacked of political correctness. Fifteen years ago, I wrote that I preferred to be in the kitchen, barefoot, pregnant, and submissive, while my kids dined on hot cross buns and played Cowboys and Indians. That’s my cringey admission for the week.

Now that my world is expanding, and my eyes are opening, my brain fires a million directions whenever a new idea is introduced. Sometimes, I can’t keep up with the thought processes, and I quickly start making notes so that I can consider the topic more fully.

Thanks to Schoolhouse Rock, which was a great service to kids like me who never would have been introduced to some of those concepts otherwise, I have always been proud of the Great American Melting Pot.  But the other day, my adult children shared that “melting pot” is not really an accepted term anymore. They say it denies individual heritage and is an example of racial microaggression.

I had to look that up. According to an article in Psychology Today, microaggressions are the “everyday verbal, nonverbal, and environmental slights, snubs, or insults, whether intentional or unintentional, which communicate hostile, derogatory, or negative messages to target persons based solely upon their marginalized group membership.”

In our discussion, the question was asked, “What if the Melting Pot is a lie that dominant white Americans tell, so they can assert their power, and culturally appropriate every minority group that comes seeking the American dream?”

At that point, I told the kids I needed a moment to adjust and process. When you have been saying something for your entire life, and you know that it was never intended to be harmful, but someone else sees it differently, it can take major brainpower to examine it from every angle.

My daughter explained that preferred metaphors include tapestry, salad bowl, and tributary. Tapestry made immediate sense to me.  I can see how the threads of various cultures are being continuously woven together into the big picture of America.

I had to think a little bit harder on the salad bowl. Each culture is one part of the salad (lettuce, tomato, cucumber, etc.), and together we make one dish. This is similar to the melting pot, but unlike a fondue where everything blends into one unidentifiable glob, each part of the salad still retains individual flavor.

Tributary is an interesting choice. I can easily imagine every culture as its own stream, and each stream leading into the main river, aka America. Unlike the salad bowl, this doesn’t leave room for individuality once the river is reached. But streams are beautiful, and flowing rivers serve great purposes, so I’m still considering it.

Ultimately, what it boils down to is the exact same thing I boiled it down to in the article I wrote a decade-and-a-half-ago; motives of the heart. Not many of us seek to be intentionally offensive. We are simply talking, thinking, and acting in the ways we have always been taught. If I didn’t have savvy and sensitive adult children, I wouldn’t have a clue that my use of the term “melting pot” might be hurtful to others. But now that I know, I have a responsibility to decide whether it is more important to stick to my old fondue, or allow a new way of thinking to flow through my heart and mind.

It has been years since I’ve desired to run around my kitchen, barefoot and pregnant, and I dropped the word “submission” from my vocabulary long ago. I have no regrets about changing that major point-of-view. At this moment, I know of three terms that, to my knowledge, will not be hurtful or offensive to anyone. So, dropping the term “melting pot” will be as easy as apple pie.

« Dialogue with a Grown-Up Man
Confronting my own racism »