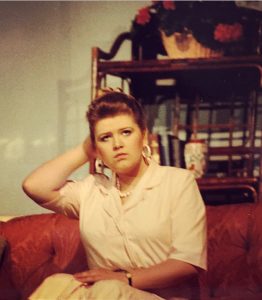 Me at seventeen: the prim and proper Baptist preacher’s daughter

“Did you enjoy the dance?” my Baptist preacher daddy asked with an air of accusation.

Six weeks prior, I had transferred from a small Christian school to a large public school. It had not occurred to me that the Valentine Party held in the band room would involve dancing. I pictured myself hanging out with the other clarinetists, laughing over red punch and heart-shaped sugar cookies. But when I arrived, all of the other clarinetists, as well as the flautists, were dreamily swaying in the arms of trumpeters, trombonists, and percussionists. Even the one lone bassoonist was no longer alone.

I’d never seen people dance in real life. Dancing was a forbidden activity that I had been told would lead to pregnancy. I stood in a corner, nervously clutching a bag of Corn Bugles. My mother had said that bringing them would help me make friends because everyone would see how clever it was to bring “bugles” to a band party.

After a few minutes, a much younger French Horn player sidled up and asked me to dance. I looked down at the top of his head and wondered if he always wore his hair slicked back like that. I politely declined, but he extracted a promise that we could dance if a Barry Manilow song happened to play. I was one of only two Fanilows in the entire school, so I figured the chances were pretty slim. I did not know that music could be requested.

I stood with my arms stretched stiffly in front of me, wrists resting on my partner’s shoulders, while we swayed to Weekend in New England. I felt guilt, mortification, and fear that I wouldn’t be able to figure out a pregnancy test.

Fast forward thirty years. Somehow, without ever again gracing a dance floor, I managed to have five kids. So, when I divorced and decided to try my hand at being wild and crazy, I signed up for a belly dancing class. My instructor did everything she could to encourage me, but in exasperation I lamented, “I simply can’t do it. I have Baptist hips.”

I explained my history, including how in eighth grade a cheerleading coach held my hips in place to keep me from swaying. 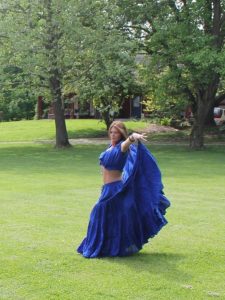 Me at forty-eight: learning how to sway my hips

For the past year, I’ve been swaying all over the place. Sometimes, I’ll sashay down the sidewalk, grinning broadly and saying to myself, “I wish I had a swing like this on my front porch!”

With my newfound hip-shaking frenzy, I wasn’t the least bit surprised when I was working on my dance moves in preparation for the local Dancing With The Stars competition, and the instructor said, “You need to tone it down there, Shakira.”

Only thing is, she wasn’t talking to me. She was talking to my partner who apparently has the swaying-est dance moves of any man this side of the Panama Canal. My unlocked Baptist hips got nothin’ on this guy. Elvis Presley and Ricky Martin could learn a thing or two from him.

It makes sense though, he’s Catholic. Catholics are allowed to dance. And I happen to know he played the saxophone in high school. It’s a good thing I didn’t know him back then. Barry Manilow or not, I would have dropped my bugles and unlocked my hips that night. And when my Baptist preacher daddy asked the question, “Did you enjoy the dance?” I would have delivered a resounding, “Yes!”

« Confronting my own racism
Earning the right of self acceptance »