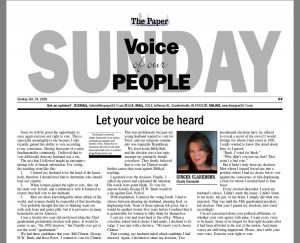 Soon we will be given the opportunity to once again exercise our right to vote. This is especially meaningful to me because I only recently gained the ability to vote according to my conscience. Having been part of a strict fundamentalist community, I believed that to vote differently than my husband was a sin.

The sect that I followed taught an uncompromising role of female submission. For voting, the teaching went like this:

You probably thought this line of thinking went out with sock hops and goiter pills, but it is pervasive in many households across America.I was a twenty-two-year-old newlywed when the 52nd quadrennial presidential election took place. It would be easier to say, “the 1992 election,” but I hardly ever get to use the word “quadrennial.”

We had three candidates that year: Bill Clinton, George H.W. Bush, and Ross Perot. I wanted to vote for Clinton. This was problematic because my young husband wanted to vote for Perot, and our religious community was staunchly Republican. We lived in the Bible Belt, and the election was a hot topic amongst my primarily female coworkers. They firmly believed that to vote for Clinton would further causes that went against Biblical teaching.

I agonized over the decision. Finally, I called my pastor and explained the situation. His words were point blank. To vote for anyone besides George H.W. Bush would be a sin against God. Period.

With trepidation, I entered the voting booth. I had to choose between pleasing my husband, pleasing God, or displeasing both. None of those options felt good, but it would be another twenty-five years before I realized that it is permissible for women to fully think for themselves.

I cast my vote and went back to the office. When a coworker asked which choice I had made, I declined to divulge. I was met with a derisive, “We knew you’d choose Clinton.”

That evening, my husband asked which candidate I had selected. Again, I declined to share my decision. Two presidential elections later, he offered to reveal a secret of his own if I would divulge for whom I had voted in 1992. I really wanted to know this detail about him, so I agreed.

“Why didn’t you just say that? That wasn’t a bad vote.”

But it hadn’t truly been my decision. Men whom I trusted forced me into a position where I had no choice but to vote against my conscience or risk displeasing a God for whom I worked hard to find favor.

Every election thereafter I voted my husband’s choice. I didn’t study the issues. I didn’t listen to my heart, my gut, or my brain. I simply did what was expected. That was until the 58th quadrennial presidential election. That year I gained my freedom, and voted accordingly.

I’m not concerned about your political affiliation, or whether your vote agrees with mine. I want every voice to be heard. Some of us longed for that right decades after it had been afforded to the rest of the nation. And many voices are still being suppressed. Please, don’t stifle your own voice. Exercise your right to vote.