I was pretty much born in church. I was actually Baby Jesus in the Christmas nativity, and my young parents played Mary and Joseph. So, I grew up surrounded by church ladies who knew me from infancy. They were faithful friends to my grandmother, and I belonged to all of them.

But Mrs. Bentley was different. She was quiet, and kept to herself. She was always there, always faithful, always in the same pew, but she seemed to be on the outside of the church social circle. I’m not entirely sure why. I think some of the women did not treat her well, but I was a child, and as my mother, my grandmother, and Mrs. Bentley are all dead, I can’t ask why.

It makes me kind of angry that anyone in church should ever be an outcast, especially someone faithful and kind. At church dinners, I was always made aware of the food she brought, and I was carefully instructed not to take any of it. Everyone would be laughing and fellowshipping over plates that brimmed with gluttony, but I don’t remember anyone interacting with her. She either kept to herself, or others avoided her. I’m not sure which.

My family eventually moved away, but whenever I visited my grandmother, I would see Mrs. Bentley, still in her same pew. She would look at me with kind eyes, and sometimes I felt compelled to talk with her. She would ask how I was doing, and smile, but I never took the time to really know her. I remember sometimes watching from across the gravel parking lot as she climbed into the old pickup truck where her husband waited to drive her home. I had an image of her home in my mind, and today I wonder about its accuracy.

My wedding was held in my childhood church, so I sent a general invitation to the entire congregation. I was surprised when Mrs. Bentley showed up, gift in hand.

Another church lady observed the addition to the gift table, and sneered, “She just collected those old bowls from around her kitchen, and stuck a bow on them.”

Indeed, there were a stack of five mismatched bowls, each one separated by a paper towel, and a somewhat disheveled looking bow clinging to one side.

Nearly thirty years later, one of those bowls is still the most oft used one in my kitchen. It survived even though the marriage did not.

I don’t have any other wedding gift still in use. I can’t even remember what most of them were. Because I was poor, I left several items in their original boxes, and regifted them to friends and acquaintances who got married around the same time. The rest met one demise or another over the years.

But this bowl remains. Just an old bowl an old woman gave me from her own kitchen. Today, I am using it to make an egg white omelette with olives, artisan cheese, and freshly cracked black pepper. I wish Mrs. Bentley was here to cook and dine with me. I’d wrap my arms around her neck, and thank her for sacrificially giving of herself in the way that all Christians should. 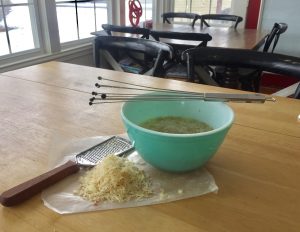