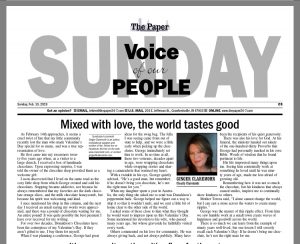 As February 14th approaches, it seems a cruel twist of fate that my little community recently lost the man who made Valentine’s Day special for many, and was a true representation of love.

He first came into my awareness twenty-five years ago when, as a visitor to a large church, I received a box of handmade chocolates. Upon expressing surprise, I was told the owner of the chocolate shop provided them as a welcome gift.

I soon discovered that I lived on the same road as the cozy little shop where George created and sold his chocolates. Stopping became addictive, not because he always remembered that my favorites are the dark chocolate orange slices, and the milk chocolate honeycomb, but because his spirit was welcoming and kind.

I once mentioned his shop in this column, and the next day I received an email saying my words were appreciated, and there was a pound of chocolate waiting for me. An entire pound! It was quite possibly the best payment I have ever received for my writing.

For over two decades, Donaldson’s Chocolates have been the centerpiece of my Valentine’s Day. If they aren’t gifted to me, I buy them for myself.

When I was planning a conference, George had great ideas for the swag bag. The fella I was seeing came from out of state to help, and we were a little early when picking up the chocolates. George immediately set him to work. In no time at all, these two veterans, decades apart in age, were wrapping chocolates while swapping stories and sharing a camaraderie that warmed my heart.

With a twinkle in his eye, George quietly advised, “He’s a good man, but remember, if he doesn’t bring you chocolate, he’s not the right man for you.”

When my daughter spent a year in Australia, the only thing she asked me to send was Donaldson’s peppermint bark. George helped me figure out a way to ship it so that it wouldn’t melt, and we sent a little bit of home clear to the other side of the world.

I asked some of those close to him what they thought he would want to impress upon us this Valentine’s Day. Some mentioned his devotion to his wife, who passed many years ago, but whose graveside he faithfully visited every week.

Others commented on his love for community. He was always giving back, and not always publicly. Many have been the recipients of his quiet generosity.

There was also his love for God. At his funeral, the minister handed out ninety of the one-hundred-thirty Proverbs that George had personally marked in his own Bible. Words of wisdom that he found pertinent to life.

His life impressed many things upon me. Seeing him contentedly work at something he loved until he was ninety years of age, made me less afraid of growing old.

Remembering how it was not so much the chocolate, but his kindness that always caused smiles, inspires me to continually show kindness to others.

Mother Teresa said, “I alone cannot change the world, but I can cast a stone across the waters to create many ripples.”

George was the master of this ripple effect. From him we saw humble work in a small town create waves of happiness and goodwill across the world.

There is so much we can learn from the example of ninety years well-lived, but one lesson I will sweetly recall each Valentine’s Day: If he doesn’t bring me chocolate, he’s not the right man for me. 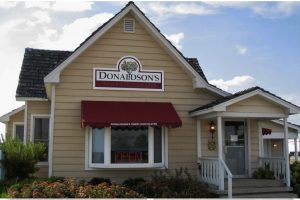 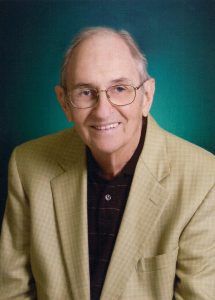 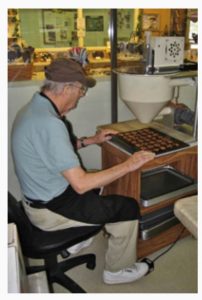 « The Valentine I almost forgot
The Four Generation Gift »