Recently, I was perusing my junior high yearbooks when I found the following inscription from 1983: “Gingeretta, you’d make a gorgeous model, ya know. I think Ricky Schroder doesn’t know what he’s been missing! You’re really sweet. I hope you stay that way. Someday, when you’re a rich, famous model, and I’m a rich, famous writer, I’ll call you and say, ‘Hey, Ginger, come on up to my penthouse for some champagne!’ Have a smashing summer!!! Luv, Jo”

Let’s just skip right over the fact that my clever parents saddled me with the moniker of Gingeretta, and move on to the first phrase.  “You’d make a gorgeous model.”

I was fourteen that year, and I longed to enter Seventeen magazine’s “Model of the Year” contest.  My dad tried to help out by taking me to interview at the Barbizon school of modeling.  I am blessed with a daddy who always believes in me, even when the odds suggest otherwise.

In preparation, I spent hours choosing just the right blouse and skirt, and I packed on pounds of makeup.  The Barbizon people said they could teach me how to put my best foot forward, but they were pretty blunt about the fact that models are tall and slender.  I had already reached my full height of 5’4’, and my figure could best be described somewhere between plump and portly.  Plus, my face was still developing.  While I appreciated Jo’s enthusiastic encouragement, a modeling career was never in my future. 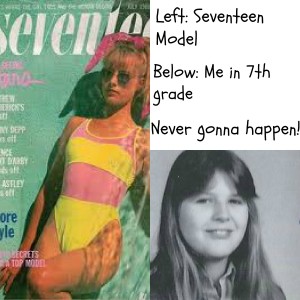 Thirty years later, Ricky Schroder, teen star of the 80s show Silver Spoons, still doesn’t know what he’s missing!   I don’t know exactly what I saw in the gangly kid, but I was smitten.  You might recall a short-lived show called, “Cloud Nine” hosted by Glenn Scarpelli.   The premise of the show was that people from across America would write and share their wishes.  Each week, someone was chosen to have their dreams come true.

While other people were wishing to being reunited with long-lost family members, or have their talents nationally recognized, I pulled out my best stationery and explained how my life would be complete if I could spend one day at Disney Land with Ricky Schroder.  I have no idea why I chose Disney Land, except that, besides Hollywood, that is all I knew of California. 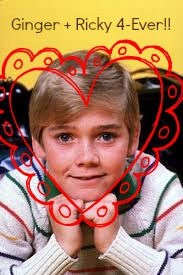 I watched anxiously every week, daydreaming about all the fun Ricky and I would have riding roller coasters, and sharing cotton candy.  I plotted to pack off-limits clothing in order to avoid wearing the culottes that were a mandatory part of my young Christian wardrobe.  I felt certain that Ricky Schroder would not find culottes attractive, and was willing to risk having my picture taken in a pair of ungodly shorts. 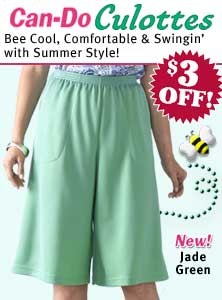 Eventually, Cloud Nine went off the air, and so did Silver Spoons.  But who knows?  Maybe my letter fell behind a cabinet at the NBC studios, and someday it will be found.  I bet it will be passed on to Rick (he dropped the Y) Schroder, and he will surprise me by calling and inviting me to Disney Land.  People magazine will publish pictures of us together on the roller coaster, and at the same time the Ford modeling agency will decide that the “new look” is middle-aged women who are slightly overweight and undertall.  Once I’m famous, I could go by a single name like Cher or Madonna.  Now that I think about it, Gingeretta has a nice ring to it!

« Pretty girls say the darndest things!
Memories Not For Sale »