“Your articles are so cream-puff. Does a substantial thought ever flit through that head of yours?”

“I shan’t subject myself to your unladylike writings any longer! You have offended my delicate sensibilities by using the word poop!”

“Why do you hate puppies and small children?”

It might surprise you that in the twelve years I have been writing a weekly column, reader feedback has not always been positive. When given the opportunity, I correspond with the person who feels as though I am misusing my space in the paper, and I always learn something new. But anonymous complaints don’t even get my consideration. If you don’t believe enough in what you have written to sign your name to it, why should I spend my time worrying about it?

John Hancock set this example when he signed the Declaration of Independence with a signature much larger than the others. Maybe it was so King George could see it without his spectacles. Maybe he went first and thought everyone else would follow suit. Or maybe he was distracted by a text from his wife telling him that dinner was getting cold, and he needed to come home instead of hanging out with the boys.

There could be a number of reasons his signature dwarfs the others, but I like to think he was boldly declaring that he firmly believed in the words that had been penned, and he would not be swayed.

When I was in ninth grade, I followed his example. Our small school had a new yearbook advisor; an English teacher. She was a braggadocio, and had publicly declared that there were absolutely no mistakes in the 1985 edition of Reflections. When I got my copy, I found twenty-six errors. I was also extremely disappointed in the lack of candid photos. Every picture was staged, and every caption was written in excruciating detail. “After a three-week absence, Sally Smith sits in the second row of Mr. Jones’ third hour Geometry class, held in room 306, and thoughtfully chews the eraser on the end of her recently-sharpened, yellow, No. 2 pencil.”

I missed fun captions like, “No wonder Sally missed three weeks of school! She probably had lead poisoning!”

I don’t remember if I was the instigator of the band wagon, or if I jumped on with everyone else, but I was the one nominated to write a petition.

A petition is a great thing. It gives one a feeling of actually having power in a situation, and the satisfaction of bonding with other like-minded people who are equally disgruntled.

Our goal was to prevent the English teacher from continuing to hold the position of yearbook advisor. It didn’t occur to us that she had put in many unpaid hours of her time to ensure that we would have something by which to remember the 1984-85 school year. It only mattered that she said she was perfect, and we had black and white proof that she was not. She also lacked imagination, which could be a general downfall of grammar Nazis.

On the last day of school, every person whose name was on the petition was summoned to the principal’s office. I was accustomed to being called to see the Vice Principal, who was also familiar with my writing endeavors, but this was the big time. Thankfully, it was not the same principal that I later declared my love to in another unfortunate writing event.

In a surprising turn of events, my previously outspoken classmates suddenly became quiet. When asked who was responsible for writing the petition, every head turned toward me. I believed in what I had written, and like John Hancock, I would not shrink beneath the scrutiny of those who had the power to march me to the guillotine.

I stood up, and stated our demands. The principal peered over his glasses and made a comment that I had not yet been trained to recognize as sexist:

“I’m surprised that a girl with a face as pretty as yours could come up with something like this.”

He then folded the petition, tucked it into his suit pocket, and informed us that not only would the yearbook advisor retain her position, she would never know of our complaints.

I guess he thought girls could only write cream-puff pieces. He probably also thinks girls don’t p-o-o-p, and that we all have a natural affection for puppies and small children. 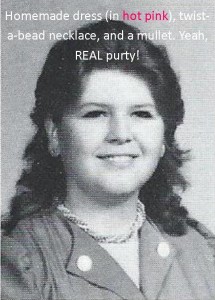