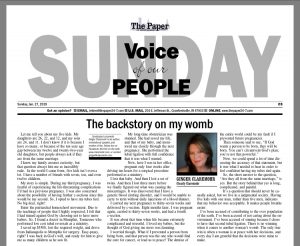 Let me tell you about my five kids. My daughters are 26, 22, and 12, and my sons are 24, and 11. I don’t know if it is because I have so many, or because of the ten-year age gap between my twelve and twenty-two-year old daughters, but people always ask if they are from the same marriage.

I know my family arouses curiosity, but that question always hits me as incredibly rude.  In the world I came from, five kids isn’t even a lot. I have a number of friends with seven, ten, and even twelve children.

My story is simple. During my third pregnancy, I was fearful of experiencing the life-threatening complications I’d had in a previous pregnancy. I was also concerned about the possibility of having further c-sections since this would be my second. So, I opted to have my tubes tied. No big deal, right?

Enter the patriarchal homeschool movement. Due to the teachings of people that I highly respected, I felt that I had sinned against God by choosing not to have more babies. So, I found a doctor in Memphis, Tennessee who performed low cost tubal reversals as a ministry.

I saved up $3500, lost the required weight, and drove from Indianapolis to Memphis for surgery. Easy peasy. I was back in God’s will, and ready for him to give me as many children as he saw fit.

My long-time obstetrician was stunned. She had saved my life, and that of my baby, and monitored me closely through the next pregnancy. She performed the tubal ligation with full confidence that it was what I wanted.

Now, here I was in her office, pregnant only four weeks after driving ten hours for a surgical procedure performed as a ministry.

I lost that baby. And then I lost a set of twins. And then I lost three more before we finally figured out what was causing the miscarriages. It was discovered that I have a genetic blood clotting disorder, and I would be unable to carry to term without daily injections of a blood thinner.

It was about that time when life became extremely complicated and stressful. I loved my babies, but the thought of God giving me more was daunting.

I worried though. What if I prevented a person from being born, and that person was the one who would find the cure for cancer, or lead us to peace? The demise of the entire world could be my fault if I prevented future pregnancies.

Then someone said to me, “If God wants a person to be born, they will be born. You can’t circumvent God’s plan; you’re not that powerful.”

Now, we could spend a lot of time discussing the accuracy of that statement, but it was what I needed to hear in order to feel confident having my tubes tied again.

So, the short answer to the question, “Are they all from the same relationship,” is yes. But the story behind that yes is long, complicated, and painful.

It’s a question that should never be casually asked, but we live in a judgmental society. Having five kids with one man, rather than five men, indicates that my behavior was socially acceptable. It makes people breathe easier.

« The best a man can get
The Valentine I almost forgot »