Some of my fiction writer friends do this, so I thought I’d try my hand at it. 💋

She had not seen him in well over a year. When they last spent time together, he was caring for her as she recuperated from surgery. That was not an unusual role for him to play in her life. From the time they were kids, she could call in any situation and he would be there for her. Their life journeys, and their own personal demons, prevented them from being together on a permanent basis, but their love for one another was deep and abiding.

As she drove to their designated meeting place, she reminisced. Each memory brought a smile to her face. The first time they made love after not seeing each other in over twenty years. The gentleness with which he bandaged her wounds after surgery. The way he held her hair, and reserved his laughter, until she was done throwing up on a carnival ride at the state fair. He had seen her at her very worst both physically and emotionally, and yet he still loved her.

And so, it was with great anticipation that she looked to the night ahead. To once again sit and talk with her dearest lifelong friend was exactly what she needed. Their relationship was a respite from the world. When life left them weary and battered, they could escape together in a way that insulated them from harshness and allowed them a chance to breathe. She knew there would be laughter and silliness and maybe even a bit of romance, although they had both reserved the right to make that decision later in the evening.

He stood waiting for her next to “that huge glass sculpture” she loved so much. She knew the grin on her face was ridiculously broad, but she didn’t care. There had never been any reason to hold back her emotions with him.

“God, you look good!” he exclaimed.

She pointed out that the last time he saw her she had a drainage tube hanging from one thigh, an incision from hip to hip, and was unable to fully stand upright.

“And you were beautiful then, too,” he said as they lingered in their embrace.

After twenty minutes or so of general conversation she looked at her hands, “So what do we do now?”

They decided to walk through the resort hotel which boasted thirty-two restaurants and bars, a number of shops, and an incredible amount of scenery. Indoor waterfalls, lush foliage, and hidden paths for exploring were all housed under one magnificent glass roof. Over the years, she had been there many times with family and friends, but she still thought of it as “their” place. It was good to be back here with him.

As they walked hand-in-hand, talking and reminiscing, they stumbled upon one of the hidden gazebos.

“What?” he looked at her curiously.

“Nothing really. I just have this fantasy…more of a daydream actually…”

“Let’s have a drink first, and then perhaps I will divulge,” she teased.

They made their way to a favorite sophisticated bar, ordering scallops and beef tartare to go with their cocktails. Falling deep into conversation, they lost any sense of time, and subconsciously willed it to stop altogether. Like she knew it would, the tension of life dissipated with the outside world.

Their next stop was to be a much-loved Irish pub, but she suddenly realized they had looped back to the gazebo. She eyed him knowingly, “This isn’t a coincidence, is it?”

“I’d like to hear your daydream,” he prodded gently as he led her to the center of the floor.

“Oh, alright, but it’s silly. I have this song I like to listen to, and sometimes I think about being here dressed in a red, 1940s style dress, with my hair done up, and I’m standing in this gazebo waiting for you, but you don’t know I’m here, and you come down the path, and you’re all dressed up, sometimes in your uniform, but not always because I know you hate it, but anyway you are surprised to see me, and just as you take me into your arms this song starts playing and we dance. And that’s pretty much it. I mean sometimes there is a T.V. crew, but that’s only in the really elaborate versions.”

She began to pull up the song on her phone.

Turning, he walked down the path and around the curve until he was out of sight. A minute later he returned, casually walking toward the gazebo, and then he stopped…surprised to see her standing there.

She grinned and hit the play button.

“Darn! It skipped to the wrong song.”

Once more he disappeared around the curve. She fumbled with her phone, and then called out, “I’m ready!”

His look was playful as he stepped into the gazebo and took her into his arms. The magnificent voice of Ella Fitzgerald serenaded:

Stars shining bright above you

Night breezes seem to whisper “I love you”

Birds singing in the sycamore tree

Say “Night-ie night” and kiss me

Just hold me tight and tell me you miss me

While I’m alone and blue as can be

“Why this song?” he asked as his fingers brushed her cheek.

“Because even though we can’t be together, I always hope you’re still meeting me each night in your dreams.”

“I’ve never stopped dreaming of us,” he kissed her ever so gently. The song continued as Louis Armstrong began to croon:

Stars fading, but I linger on, dear

Sweet dreams till sunbeams find you

Sweet dreams that leave all worries behind you

But in your dreams whatever they be

“If you switch your phone to the other hand, I’ll twirl you.”

She giggled…it was a schoolgirl daydream after all. While twirling she tossed her head back in sheer delight, and caught sight of the lights twinkling overhead. As the song came to a close, he pulled her tight and offered, “We can do it again sometime, when we’re wearing the right clothes, and the TV crew is here.”

Her laughter bubbled over. It was their shared sense of humor that bonded them as kids, and it was still one of the most endearing things about their times together.

“I don’t want to do it again. This was perfect. It was sweet, and romantic, and a little touch of silly…it was exactly us.”

As they exited the gazebo, she noticed an elderly couple observing them from a nearby bench. The old woman smiled and nodded her head. She wondered how long the two had known one another. What had their journey entailed? Did they have a history of gazebo moments?

She slipped her hand into his. The future didn’t matter, and neither did the past. All that mattered was here and now. This present moment which would be forever etched in her heart and mind as a moment when she knew she was deeply loved and safe from the world. A moment she could revisit each night when she dreamed her little dream…of him.

Listen to the song: Dream A Little Dream Of Me 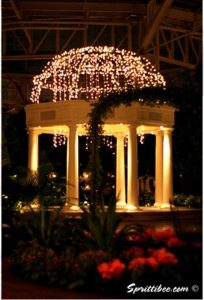 « Are We There Yet? Mentally Preparing For Your Road Trip With Kids
If I Were A Christian Nazi… »