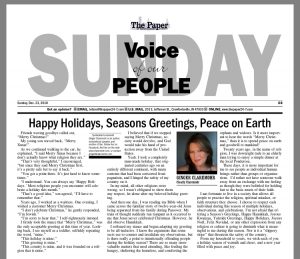 As we continued walking to the car, he explained, “I said Merry Xmas because I don’t actually know what religion they are.”

“That’s very thoughtful,” I encouraged, “but since they said Merry Christmas first, it’s a pretty safe bet to say it back.”

“You got a point there. It’s just hard to know sometimes.”

“I understand. You can always say ‘Happy Holidays.’ Most religious people you encounter will celebrate a holiday this month.”

Years ago, I worked as a waitress. One evening, I wished acustomer Merry Christmas.

“I’m sorry to hear that,” I self-righteously intoned.

I firmly took the stance that “Merry Christmas,” was the only acceptable greeting at this time of year. Looking back, I see myself as a toddler, selfishly repeating the word, “mine.”

“This holiday is mine.”

“This greeting is mine.”

“This country is mine, and it was founded on a religion that is mine.”

I believed that if we stopped saying Merry Christmas, society would devolve, and God would take his hand of protection away from the United States.

Yeah. I took a completely man-made holiday, that originated centuries ago on an entirely different continent, with many customs that had been converted from paganism, and I hinged the safety of my country on it.

In my mind, all other religions were wrong, so I wasn’t obligated to show them any respect, let alone alter my beloved holiday greeting.

And then one day, I was reading my Bible when I came across the familiar story of twelve-year-old Jesus being separated from his family during Passover. My train of thought suddenly ran rampant as it occurred to me that Jesus never celebrated Christmas. However, he did observe Hanukkah.

I softened my stance and began adapting my greeting to be all-inclusive. I know the arguments that some sects use to counter and invalidate my observations, but is there really a point to intentionally offending people during the holiday season?

There are so many more valuable matters that need attending, like feeding the hungry, sheltering the homeless, and comforting the orphans and widows. Is it more important to hear the words “Merry Christmas,” than it is to spread peace on earth and goodwill to mankind?

Twenty years ago, in the name of religion, I was downright rude to an elderly man trying to enjoy a simple dinner at the local Ponderosa.

These days, it is more important for me to see people as individual human beings rather than groups or organizations.  I’d rather not have someone walk away from an exchange with me feeling as though they were belittled for holding fast to the basic tenets of their faith.

I am fortunate to live in a society that allows all people to practice the religion, spiritual mindset, or faith structure they choose. I choose to respect each individual during this season of multiple holidays, observations, and celebrations.

I’m not afraid that offering a Season’s Greetings, Happy Hanukkah, Joyous Kwanzaa, Yuletide Greetings, Happy Holidays, Joyeux Noël, Feliz Navidad, or any other expression from any religion or culture is going to diminish what is meaningful to me during this season. Nor is it a “slippery slope” that threatens the safety of the country.

From our household to yours, we wish each of you a holiday season of warmth and cheer, and a new year filled with peace and joy.

« Your Voice is Important and so is your Vote!!
We don’t do tricks for others »