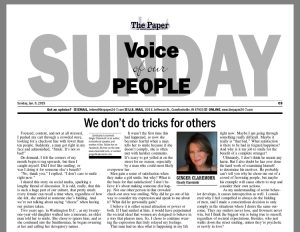 Focused, content, and not at all stressed, I pushed my cart through a crowded store, looking for a checkout line with fewer than ten people. Suddenly, a man got right in my face and admonished, “Smile. It’s not so bad!”

On demand, I felt the corners of my mouth begin to tug upwards, but then I caught myself. Did I feel like smiling, or was I doing it for someone else’s benefit?

I shared this story on social media, sparking a lengthy thread of discussion. It is odd, really, that this is such a huge part of our culture, that pretty much every female can recall a time when, regardless of how she felt, she smiled at someone else’s bidding. And we’re not talking about saying “cheese” when having our picture taken.

Two years ago, in Washington D.C., as my twenty-one-year-old daughter walked into a museum, an older man told her to smile. She chose to ignore him, and as she continued into the Smithsonian, he began swearing at her and calling her derogatory names.

It wasn’t the first time this had happened, so now she becomes fearful when a man tells her to smile because if she doesn’t comply, she is often met with harsher comments such as, “dumb b*tch,” “slut,” etc. It’s scary to get yelled at on the street for no reason, especially by a man who could most likely overpower her.

Men gain a sense of satisfaction when they make a girl smile, but why? What is the basis for that satisfaction? I don’t believe it’s about making someone else happy. Not one other person in that crowded check-out area was smiling. Why did he go out of his way to consider my expression and speak to me about it? What did he personally gain?

I believe it is either sexual attraction or power or both. If I had smiled at him, it would have perpetuated the societal ideal that women are designed to behave in a way that pleases men. So, I chose to continue wearing the expression that truly relayed my feelings.

That man had no idea what is happening in my life right now. Maybe I am going through something really difficult. Maybe it really is “that bad.” What satisfaction is there to be had in feigned happiness? And why is it my job to smile for the benefit of a complete stranger?

Ultimately, I don’t think he meant any harm. But I also doubt he has ever done the hard work of examining himself to determine his motives. He probably can’t tell you why he chose me out of a crowd of frowning people, but maybe his example will cause others to stop and consider their own actions.

As my understanding of sexist behavior develops, it causes introspection as well. I considered why I feel compelled to always do the bidding of men, and I made a conscientious decision to only comply in the situations where I desire the same outcome.

They say smilers never lose, and frowners never win, but I think the biggest win is being true to oneself, regardless of societal expectations. Besides, who just walks down the street smiling, unless they’re psychotic or newly in love? 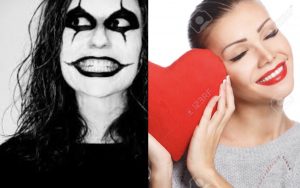 « Happy Holidays, Season’s Greetings, Peace on Earth
The best a man can get »